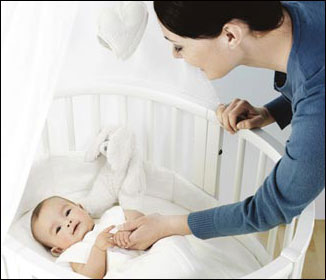 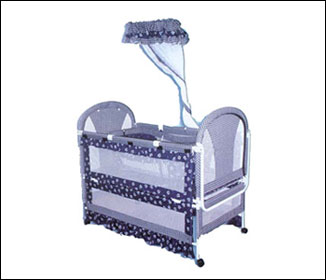 
Crib or bassinet? Surprisingly, many parents often ask themselves this question, even though cribs and bassinets are two entirely different pieces of baby furniture. Here’s a bit of information about bassinets, how to choose a bassinet, and some very important information about the correlation between bassinets and Sudden Infant Death Syndrome.

What is a Bassinet?

There are several key differences between bassinets and baby cribs. First, a bassinet is much, much smaller than a baby crib, and is used for a different purpose. The bassinet is usually only slightly larger than the baby, and cushioned with padding. The baby’s head is elevated slightly, and a blanket covers most of the baby’s body. The bassinet is meant to provide a “cocoon” environment, which is said to be soothing to newborns. Due to the close fit of a bassinet, it’s said to remind infants of the womb, and may keep them comforted until they are a few months of age.

The bassinet is usually rounded, in an oval shape. Some bassinets are attached to a stand, and may or may not have rolling wheels on the bottom. The bassinet is said to most closely look like a “cradle”, since it often has a decorative piece of cloth that half-covers the bassinet. This cloth can help shield the infant from direct sunlight.

Bassinets can be purchased with a variety of accessories, ranging from attachable toys to built-in mobiles that hang over the bassinet itself. Some bassinets even have an audio system, which can be used to play soothing music or ambient sounds as the baby sleeps. However, when choosing accessories for your bassinet, try to stay away from bumpers, extra cushions or stuffed toys placed inside the bassinet. These items can cause a higher instance of SIDS (Sudden Infant Death Syndrome).

There has been a lot of controversial information involving a connection between bassinets and SIDS (Sudden Infant Death Syndrome). While the official cause of SIDS is as of yet still unknown, it’s theorized by some doctors to be the result of an improper amount of oxygen-rich air being able to reach a baby. Also, babies may suffer from SIDS as a result of re-breathing expelled carbon dioxide. Due to the tight nature of a bassinet environment, many experts have studied if a bassinet can contribute to SIDS.

However, what they discovered was fairly interesting. In reference to bassinets, an increase of SIDS is seen only if the mattress inside the bassinet is plush or very soft. SIDS increases were not seen in bassinets that had an extra firm mattress in the bottom.

Also, infants with higher occurrences of SIDS had bumpers or extra padding in their bassinet, which may have interfered with airflow. Because of this, many baby experts advise against placing items in your baby’s bassinet, including stuffed animals, extra blankets and unneeded cushions. Also, if your baby is covered with a blanket in the bassinet, you should only allow the blanket to come up to just under your baby’s arms. This way, the blanket can’t accidentally shift to cover your baby’s mouth and nose.

When choosing a bassinet for your baby, you will have to choose between two different types – a stationary bassinet, or a portable bassinet. A portable bassinet is sometimes also called a “Moses Basket”, after the bible story about baby Moses floating down a river in his bassinet. Portable bassinets are favored as a more mobile method of keeping a baby from moving excessively. Since the bassinet is designed to be a cocoon, this means that the baby will be snug and secure.

A stationary bassinet is popular in many households as a way to keep a newborn infant immobile and safe. Stationary bassinets sometimes have a half-cover, as seen on a traditional baby carriage.

How Long to Use a Bassinet

It’s only safe to use a bassinet for your baby for a specific period of time. Bassinets are great for newborns, since they provide a safe “cocoon” environment. In many cases, hospitals will provide a bassinet so that a mother can be close to her baby immediately following delivery. Also, on some airplanes, the plane attendants will provide a soft bassinet attached to a bulkhead for parents with newborns.

However, a bassinet can only be safely be used to keep a baby in until the age of four months, or until the baby is able to roll over by itself. At this time, there is a danger of suffocation, and the baby should be moved to a regular crib.

Here are a few more of our articles where you can learn about Bassinets: